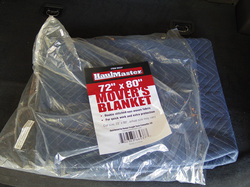 I need a good cargo cover for a C-max since my dog seems to shed hair like it was going out of style.  Until I get a system in place to protect the interior she is banned from the C-max, and since that is not cool I am working hard to puppy proof it.  I picked up a couple of moving blankets from Harbor Freight and am using those along with some very rusty sewing skills to fit a cover in the back.  I tried using one of these blankets, but it was not enough to go up the sides enough.  I plan to anchor it in several places (the rear seat belt using a plastic clip, the rear door using some thin polypropylene plastic in the door jam, and the front head rests).  I have yet to figure out how to anchor it at the rear of the vehicle near the hatch, but I am thinking of using some thin poly and wedging it between the weatherstrip and the trim.  Below I will describe the steps so far, since this is a work in progress there will be some steps yet to come...

Update 10/21/2012:  The cargo cover will just flop around without some way to secure it to the interior.  I wanted to make that as simple as possible without adding anything to the vehicle.  I decided to use several methods.  In the front I will use some shock cords with barrel locks to attach the cover to the head rests.  Moving back I will sew in some tabs which will sandwich in the rear passenger door jams, and then further back clips will hold the cover to the passenger seatbelts, and finally at the back there will be some tabs which will slip under the weather stripping to hold the back.  I am also planning on putting down some velcro rough side down in several places to hold it to the floor.

Below is a pic of some of the bits and pieces I will use to secure the cover, including the 2" quick clips, barrel locks, shock cord, 2" web and cord ends. 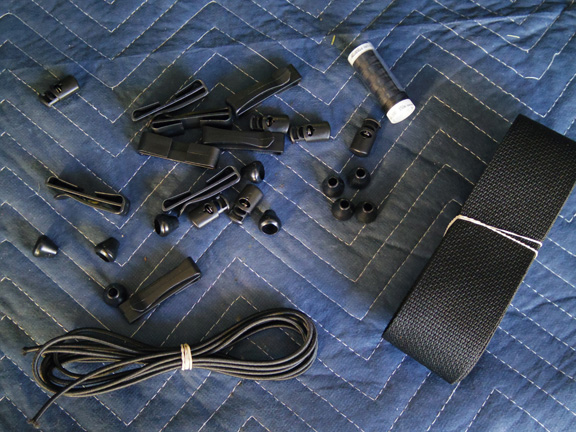 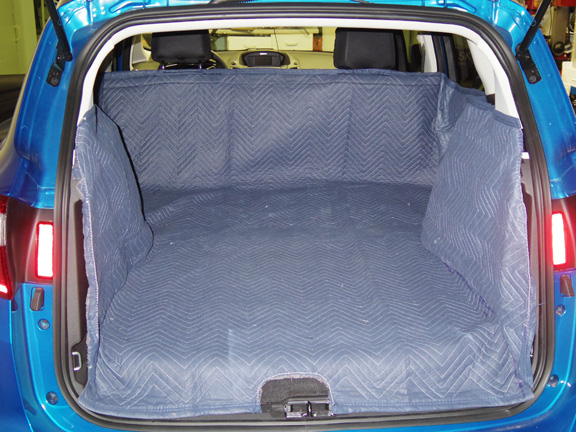