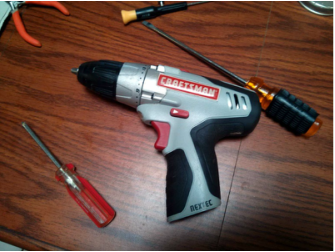 I really like my NexTec drill, so much that after the first one died with what I will describe as a "the clicks of death" I bought another one.  The problem was that after over torquing some screws or driving a bit too hard with the drill, the drill seemed to lose it's torque even at the high settings - this was accompanied by clicks.  Now the clicks are OK and completely normal if it really was over torqued (the slippage saves the gears), but it seemed that my drills were damaged by over-torquing when driving screws too hard or drilling into concrete.  Once in that condition I can stop the drill at the highest torque setting with my hands very easily - with little force.  When my second drill died the same way I decided to get out the screwdrivers for some exploratory surgery and see what is causing it.  I suspected some cheap plastic gears were stripped, but I did not find that.  In fact the guts are not too bad aside from a plastic ring gear, all the gears are metal and they used a ton of grease in the gearbox so they did build it to last.  Getting the sucker apart was a challenge though, and I am not really sure how to describe that part, it was just a lot of pushing and pulling to get the case off - I obviously was doing it wrong, but it did finally come apart.  One unique thing which I found in disassembly was that there is a clip which holds the case parts together in place of a screw at the front of the grip.

Below are some pics showing what I found inside the gearbox.  I also put together a diagram of it to help me understand how it all works.  I really did not find the problem of why it was clicking, but I think I at least know the source of the clicking - there are plastic nubs which I think are clicking against the 2nd plastic ring gear which moves with the High/Low lever on top of the drill.  I believe that these nubs may engage the case to the 2nd plastic ring gear in "high" and when it is over-torqued they skip off and the ring gear spins free for a bit and re-engages which causes the clicking and loss of torque.  Amazingly after putting it all back together it was working again so I can only guess that something in the gearbox shifted and a dissassembly/reassembly put it back in order - and it seems to work as good as new.  Since I did not find any obvious problem, I need to find my other drill which was acting similar to see if a couple well placed taps may get it working again. - UPDATED - see info at the bottom of this post with a suggested fix.

Update: After some more looking around the web I found this video which describes how the clutch works - the whole video is great but if you want to see the part about the clutch, go to 3:53.  The clicking should be from the clutch, not the plastic ring gear I was looking at earlier.  I did not see how to get the clutch apart without damaging the housing on my drill, so I am not sure if there could be a stripped ring gear in there or not.  But it likely is OK since it is still working, and seems to indicate that the disassembly could not have fixed any problem with the clutch.  One thing is clear from watching the videos though, it does not appear that the NexTec is as simple to disassemble as some others.  Here is another video showing how to remove the chuck - very handy, I wish I had done that when I was taking my drill apart.

One word of warning, this was a pain in the butt to get apart and harder to get back together, also (and this should be obvious) please don't mess with the battery and don't work on a cordless tool with the battery installed.  Also I am not an expert, just a guy with some screwdrivers and too much time on my hands. 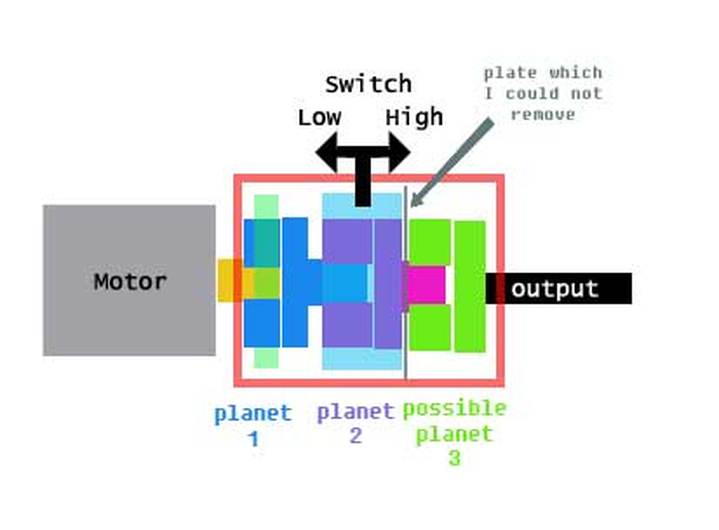 This is my interpretation of how the gears are set up inside the gearbox. There appear to be 3 planetary gears, the outer planetary gears appear to have fixed rings while the middle one is free and will slide using the high/low switch.
UPDATE:  Thanks to Jeremy who posted several comments here with a method to hopefully perma-fix the clicks of death with the Craftsman 12V drill.  He found that adding some tension to the rod which actuates the high low gears would keep the selector rod from popping out.

Below is a pic which was confirmed to show the location to wrap some plastic twist ties around the wire (on both sides - pic only shows one side) to add some additional tension in the wire - which should keep it from popping out and causing the problem with the clicks.  Thanks again Jeremy!  I'll use this fix when my drill starts clicking again. 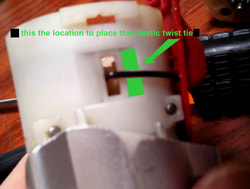