This is several years old (from 2015), and many of their meals have been updated, and thankfully the bad ones are no longer on the menu.  Back in 2015 I had sopped using them since they would often substitute meals arbitrarily, and the packaging was a nuisance with lots of foam to get rid of.  They have fixed both those problems however and now they ask what things you need to avoid during the setup for the account and they will flag those items on the menu so you can avoid them, and I also have had no items substituted recently which is great.  The packaging is also more environmentally friendly with zero foam used now, but still works great to keep the meals cold in shipping.

I have since tried them again (2020) and there were some good and some bad again, but most were good.  It was good having meals delivered during the first "stay at home" order for the pandemic going on.  Freshly's customer service (via Chat) is also great, they have been very quick and helpful.  I will leave this up however since some of the meals appear very similar or with slight changes, though several of the items are no longer on the menu, still the old reviews may be helpful.  I still have a few of the new menu meals in the freezer and will update this as I go through them.  At this time I would recommend them since they have fixed the problems with substitutions, and packaging.  The only meal on the current menu I would avoid specifically is the cashew chicken.  The best ones on the current menu are the Steak Peppercorn, the chili, Homestyle Chicken and the Chicken & Spring Pea Risotto.  I have not tried them all however. 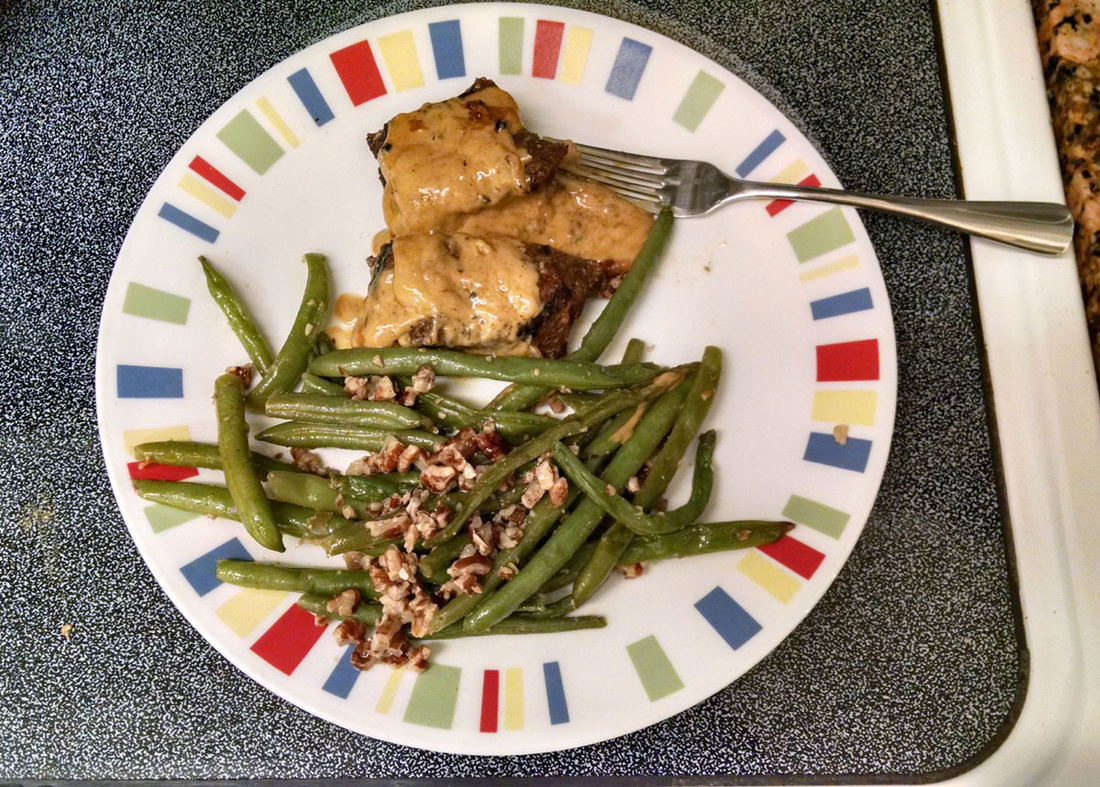 First off, this was great, and as long as it is on the menu, I will keep ordering it.  I had this previously, and it was very good then, but they were using sliced steak and not steak medallions as they are now (the medallions are a big improvement).  The peppercorn sauce has a great flavor, and the pepper is not overpowering.  There also seems to be a hint of wine flavor which I noticed in the sauce, though that is not listed on the ingredients, so I am not sure what it was.  The side with this meal is green beans with cooked pecans.  The green beans were were fresh and not over spiced or salted, and the pecans went well with them (I am normally not a fan of pecans).  This was probably the best thing I have had all week, I just hope they don't change it. 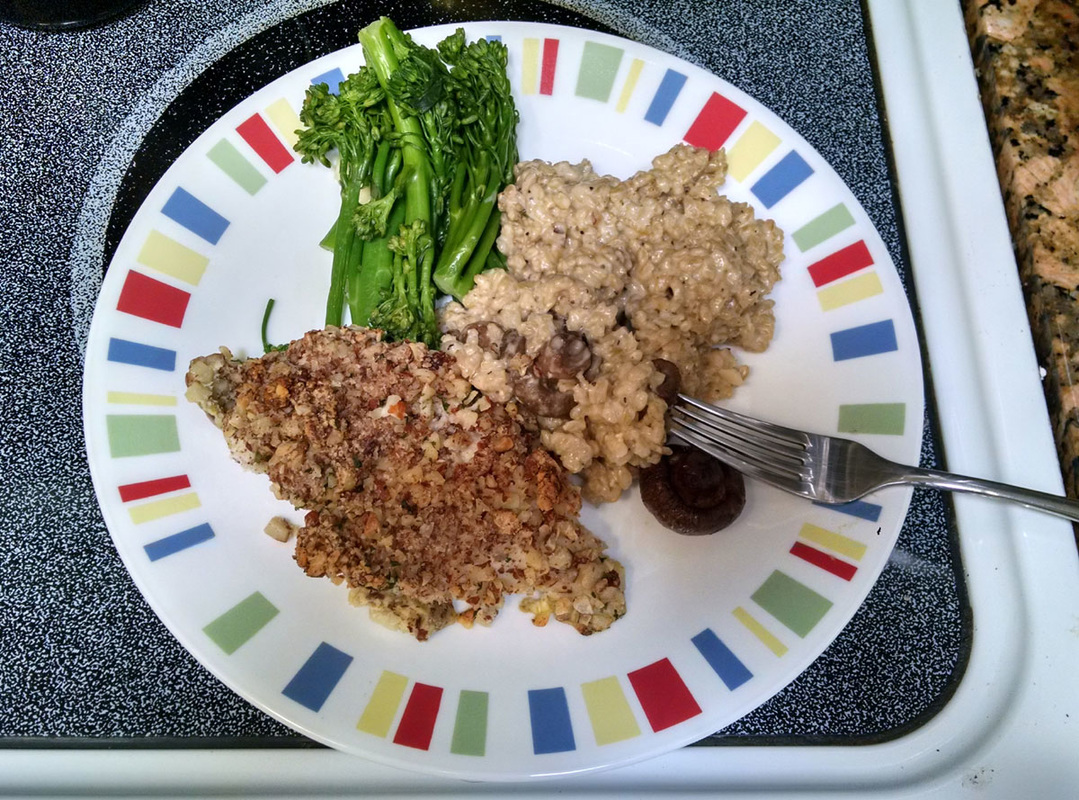 This one smelled good in the microwave (and it really needed 3min not the 2min suggested, but I put it in the toaster for 4 min as well, after 2min in the microwave).  The risotto and mushrooms were well cooked and pretty tasty, and the broccolini was good also (seemed to be steamed with maybe some olive oil and salt).  The chicken looked really good, but it lacked seasoning and tasted a bit bland, which seems to be typical of Freshly's chicken.  The almond crust on the chicken also looked good, but didn't help the chicken much if any.  I ended up mixing it with the risotto which helped.  Overall this meal was just OK, sides were good, but the chicken lacked flavor.
﻿
Verdict: 2 out of 5 Honeybadgers.﻿ 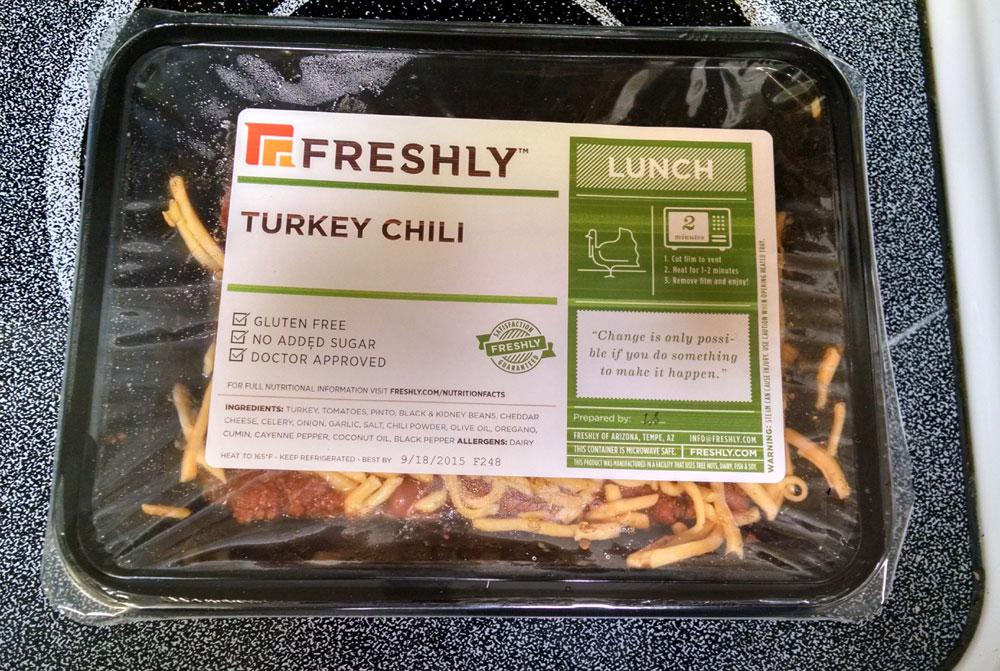 Turkey Chili with Cheese (or without if you prefer), is one of the meals that I have ordered a couple times already.  It is just a good standby.  This is on the soupy-er side for Chili, and I think they could put more beans in it to give it some more substance, but the flavor is good.  It's not too spicy, though there is some, just enough to be considered decent chili in my opinion.  I think this meal is gonna be in my top 5, even though it won't make anyone say "wow", it is simple, convenient and quick.  Sorry I lost the pic of the Chili when it was ready to eat, just picture chili with cheese on top and you get the idea.

Ingredients:
chicken, mushroom, parmesan cheese, garlic, onion, cream, basil, chicken stock, bacon, tomato, oregano, olive oil, cauliflower, parsley, shallots, nutmeg, sea salt, black pepper
The Chicken Rustica was OK, but I am not sure I will order it again.  The chicken tastes similar to the toasted almond chicken reviewed previously - that is bland.  It tasted like baked chicken, but it would have been much better had it been grilled - or at least finished on the grill. The sauce was good, not great, but it was really the only thing that gave it flavor.  The cauliflower was well cooked and tasted good, but I think this just needed something more. 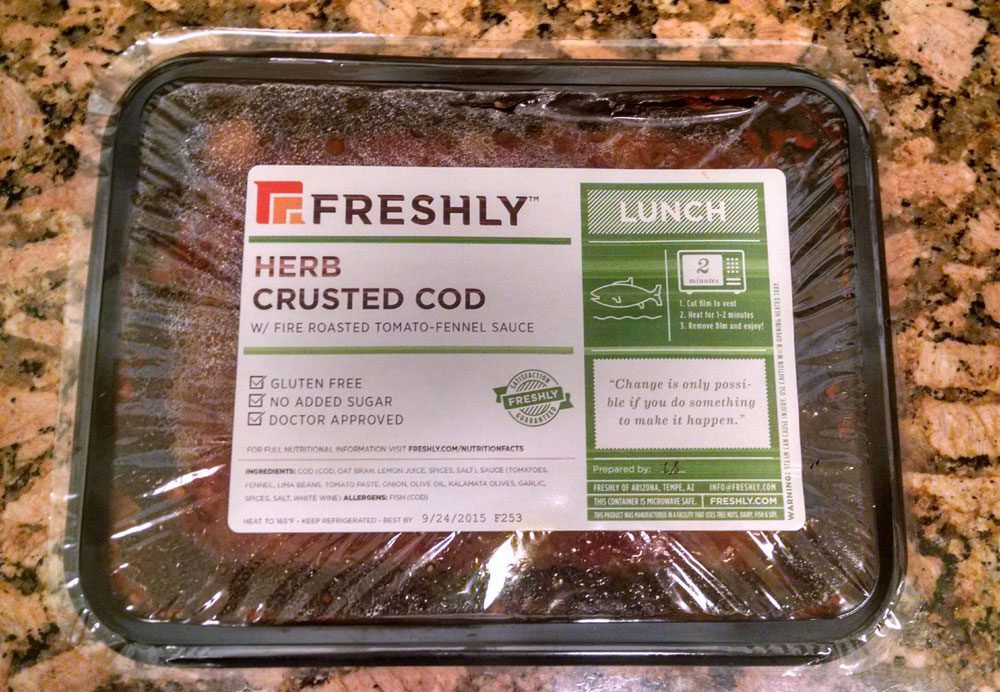 This one I missed the first time I ordered, it was substituted with a pork chop, and I was disappointed since I don't like pork.  Unfortunately I had nothing to be disappointed about.  The herb crusted cod with fire roasted tomato fennel sauce is really a case of more is less.  They threw just about everything but the kitchen sink into this, and it is the only meal I could not finish.  I'm pretty sure that short jambalaya, tomatoes and fish don't work well together, and certainly tomatoes, fennel, kalamata olives and fish don't go well together.  I should have known better, but when I ordered, all I saw was "herb crusted cod", oh well.  This may have been better if they had separated the tomato sauce from the fish, and certainly would have been better without the tomato sauce (rice or a veggie side would be good), but as it is, I would avoid it. 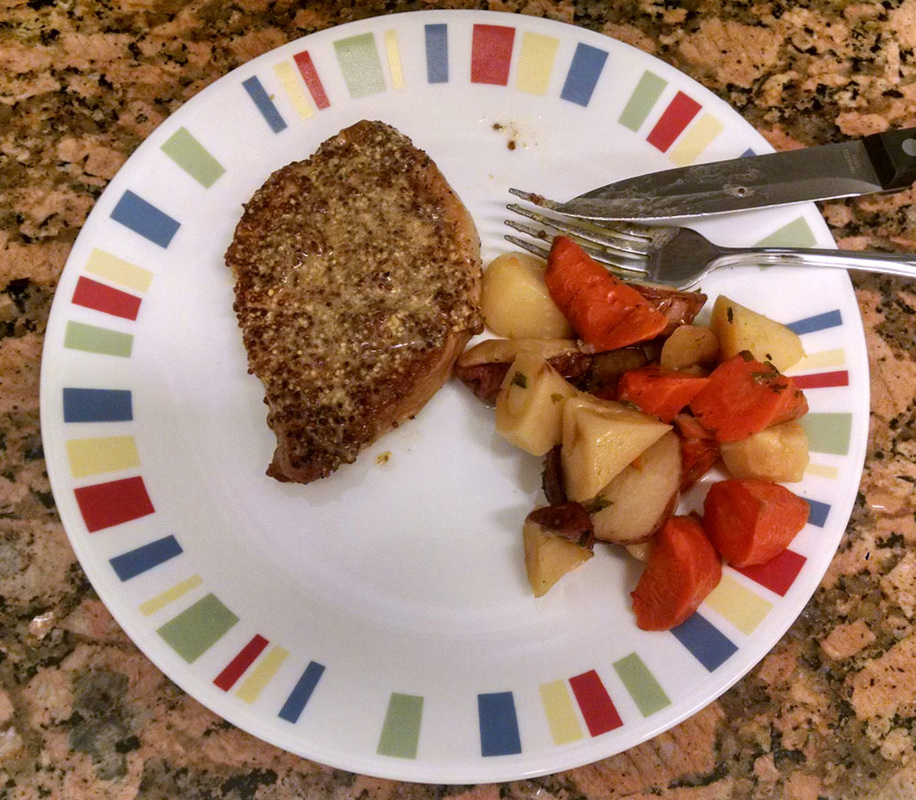 I can't really give this an unbiased review because I hate pork, but even so, I did try this since I can't review it if I don't.  This was sent as a substitution, and aside from my hatred for pork, it was pretty good.  My dog also enjoyed a few more table scraps than usual (removed the mustard of course).  The dijon mustard sauce was really good, and it may even work with grilled chicken (hint).  The pork chop itself was lean, and like everything from freshly so far, the real deal (not some mystery spam like you may find in a frozen dinner).  I really liked the side they used with this, it was carrots, parsnips and potatoes in a butter sauce which tasted like it was slow cooked in a crock pot with a pot roast - perfect.  The side was great, and I hope they put these with some of their other offerings - it would go really well with pot roast if they ever add that to the menu.

Even though I hate pork, I think this is a winner, which unfortunately I wont be ordering again.

Ingredients:
salmon, red bell pepper, green bell pepper, broccoli, onion, capers, olive oil, coconut oil, lemon, garlic, salt, black pepper, red pepper flakes
The Lemon Garlic Salmon is one of the better meals I've had from Freshly.  Even though the salmon is re-heated in a microwave, it did not get rubbery or taste overly fishy.  I had to add another minute (3 minutes total) to get it hot enough though so I think they went conservative on the 2 minute suggestion for heating.  The salmon was not over done or over seasoned, it was just a bit of lemon and garlic which was perfect.  The side could have been better, it was a bit of broccoli and some mixed peppers with not much in the way of seasoning.  The mixed peppers would go better with an omelet or fajitas, they did not go well with the fish at all.  A better side would have been green beans, asparagus or broccoilini (that last one would be great with this).  The salmon was good, but this meal was let down by the side item.  The Lemon Garlic Salmon continues a trend, with Freshly making incongruous choices for their side items, bringing down what otherwise would have been a really good meal. 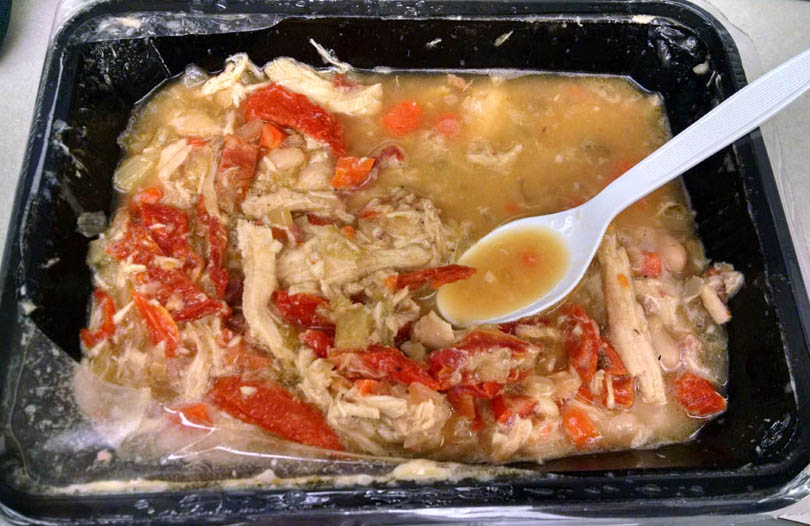 Freshly's Tuscan Chicken soup was pretty OK, but nothing like we used to have back on Tatooine.  Though getting Tuscan Chicken Soup delivered is a heck of a lot easier than trying to stay on the good side of a Tuscan soup stand chef; this is what they did to a guy who posted a negative yelp review.

Freshly's version of Tuscan Chicken Soup did not have as much seasoning as I would have preferred.  It's just a simple chicken soup, and the sun dried tomatoes could be replaced with carrots, potatoes or noodles and it would be taste pretty much the same.  It won't wow anyone, but I will probably order it again. 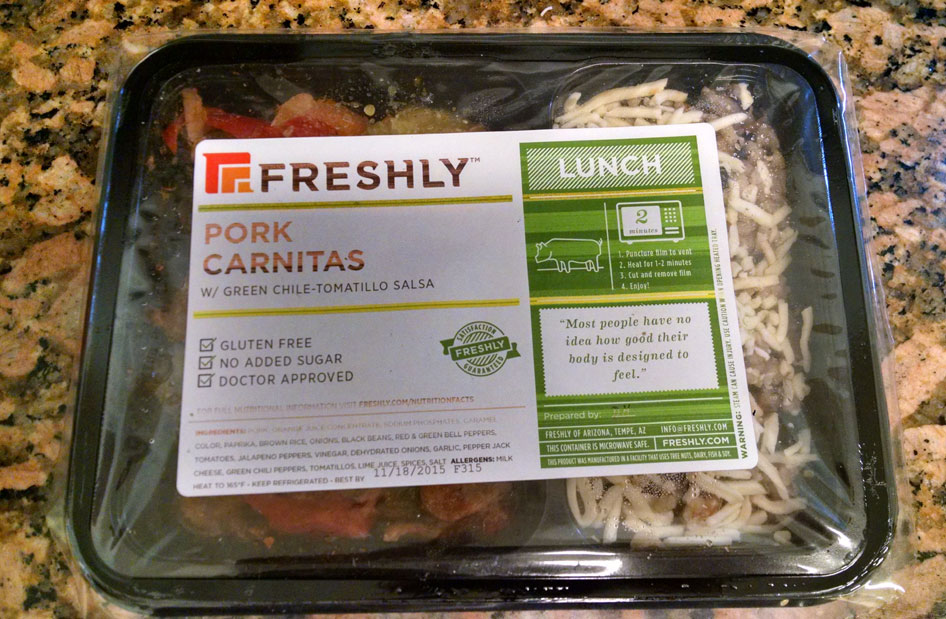 This is one of the substitutions, which I never would have ordered since I am not a fan of pig meat.  I only tried a few bites of the pork carnitas, but it was not bad.  The pork was well seasoned and the peppers were fully cooked (not crunchy), which is typical of carnitas.  This does have some less than home-made sounding ingredients, and some people may not like that it contains caramel color.  The side with this is some bean and rice mix which works pretty good with the carnitas.  Add some corn tortillas and you would have a pretty decent lunch. 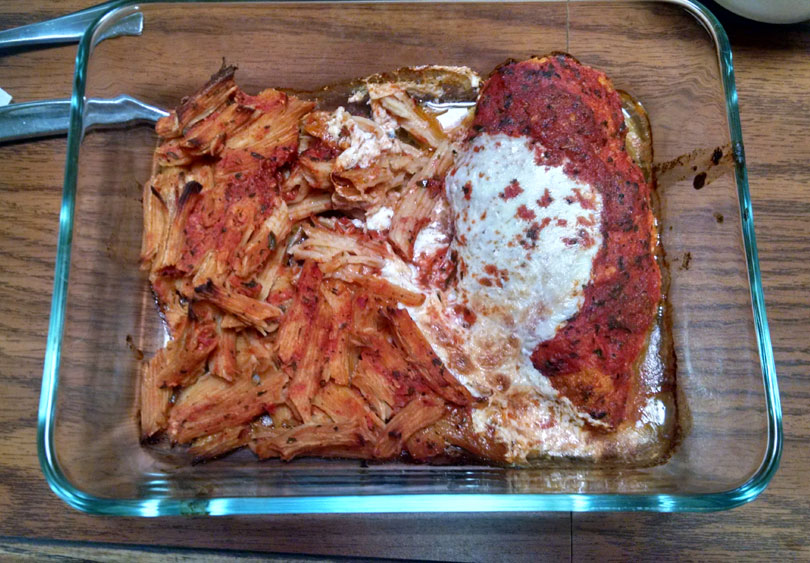 Due to issues with Freshly fulfilling my orders, I have decided to quit them, however there are still two items left which I had not reviewed.  The chicken parmigiana is one of them.  I had tried this before, and found that microwaving it made the chicken tough and it generally sucked.  Since I had another one, I tried the toaster oven this time, putting it in a pyrex dish.  I heated it in my toaster oven at 350 degrees for about 25min, and that may have been a bit too long, but it did improve the meal.  Even after cooking in the oven, the chicken was a bit tough still but much better than when cooked in the microwave, though I probably did overcook it a bit (notice the burnt pasta).  A Hot Logic Mini would probably work just as well if not better than an oven for heating this at work, as an alternative to the microwave.

Just as in Freshly's other chicken dishes, the chicken here is the biggest let down.  By itself the chicken is pretty bland, relying on the sauce for almost all the flavor.  Shredding the chicken and mixing with the sauce was the best way I found to even out the flavor.  The sauce was OK when cooked in the oven, however when it was cooked in the microwave it was too watery.  The sauce was borderline, and could have been much better.  I think at a minimum the sauce is in need of garlic and maybe some salt.  The mozzarella cheese was the best part of this, and added some needed flavor and salt.

UPDATE - the new 2020 version of Chicken Parmesan is much better, though instead of pasta for the side they are using broccoli for some reason.  The chicken is now breaded if you can call it that, and has a better overall flavor.  Probably would give the new version 3.5 Honeybadgers, but since you can't split Honeybadgers unless you are some kind of monster, lets call it 4.