This is a simple guide on how to assemble my remix of Ocie's 21-Cup Filament Silos.  The idea behind this remix is to incorporate several features that were lacking in my current setup, which already uses similar Rubbermaid 21-Cup Storage containers.  Ocie's design is very well documented and he kindly included the STEP files which is a huge benefit when remixing.  I also liked the use of dovetails to hold the spool rollers, and thought I could design a center axis spool holder which would work with both his original and this remix.

I added the following to Ocie's original design:
One major difference between this design and Ocie's original is that mine was designed for the 21 Cup Rubbermaid containers with the milky plastic and the solid red lids, not the crystal clear containers with a window top like Ocie used.  Because of this, my remix has a slightly larger base which mounts to the lid.  I suspect that this remix will still work with the clear window lids, but it may not fall into place on those as nicely.  I have been unable to find the crystal clear Rubbermaid containers around here and question if they were discontinued, but I can still get the type with the solid red lids (but I have enough right now anyway).

This design is tailored to my particular use, but I figure there are enough folks with encosures or some need for a similar system of a fixed base and dry boxes which can be mounted and fixed in place until the next one needs to be switched in it's place.   I have used this several times, though have not permanently mounted it on my printer since I'm still finalizing the orientation I want to use, but I think it could be temp mounted using some 3M Command strips or screws.  The latching base really holds the container well and I suspect it could even be mounted upside down and work as well, though it would require a different roller design.  I also designed a flexible base (to be printed in flex filament) that is not designed for sealing but more for making a cleaner looking install.  I tried printing the flexible base but it destroyed my PEI sheet since I ran out of hairspray to use as a release agent.  I may not use it anyway, but will include the file with the rest.

There are only two things that I don't particularly like is that I sometimes need to open the box to start the spool which can be somewhat mitigated by remembering to bend a bit of filament before installing the cap (to keep it from backing out the hole).  Having a bit of bowden tube extend inside the enclosure of the case also can help with this.  The other issue is that due to the low friction of the spool holder, some materials (especially flexibles) can much easier unwind in the holder.  I'm considering but have not designed a few solutions to these issues, including adding a TPU "brake pad" somewhere to give the spool some resistance to turning, and similarly a filament wiper/cleaner, which may also act as a way to hold the filament just a bit.  I'm open to other ideas too, but right now I'm also moving on with another project to hopefully wrap up my enclosure.

Now to building this thing:

Step 1: Install the Lid on the Silica Gel Compartment

Get a smaller size paper clip and bend it as straight as possible, then thread it into the hole on the back of the desiccant compartment and it's lid, to form a hinge.  Then I trimmed off the excess with the edge cutters. 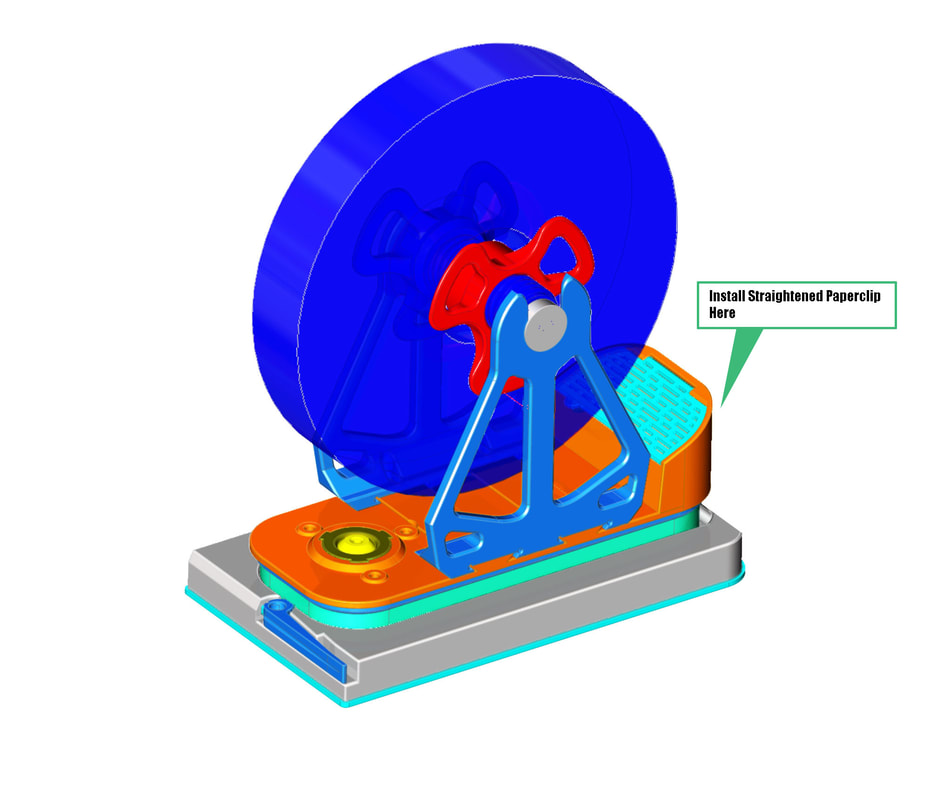 Step 2: Assemble the Base

The first step before assembling the base is to install all the M4 lock nuts.  There are 4 of them that go in the underside of the innermost part of the base which has the dovetails and the compartment (will call this the top).  There are an additional 5 which go into the bottom of the base which is the large part which you can see from the outside.  The locknuts should be oriented in the correct direction and using a longer M4 screw to set them in helps.  They should go in snug but not too tight that it's impossible to install.  If you run into a problem where they just won't go in, you can try heating them to melt them in, though that will also mess up the plastic insert in the nuts so be aware of that.  If they don't fit, try calibrating flow and e-steps (I would do this beforehand but I'm assuming the parts are already printed with this guide). 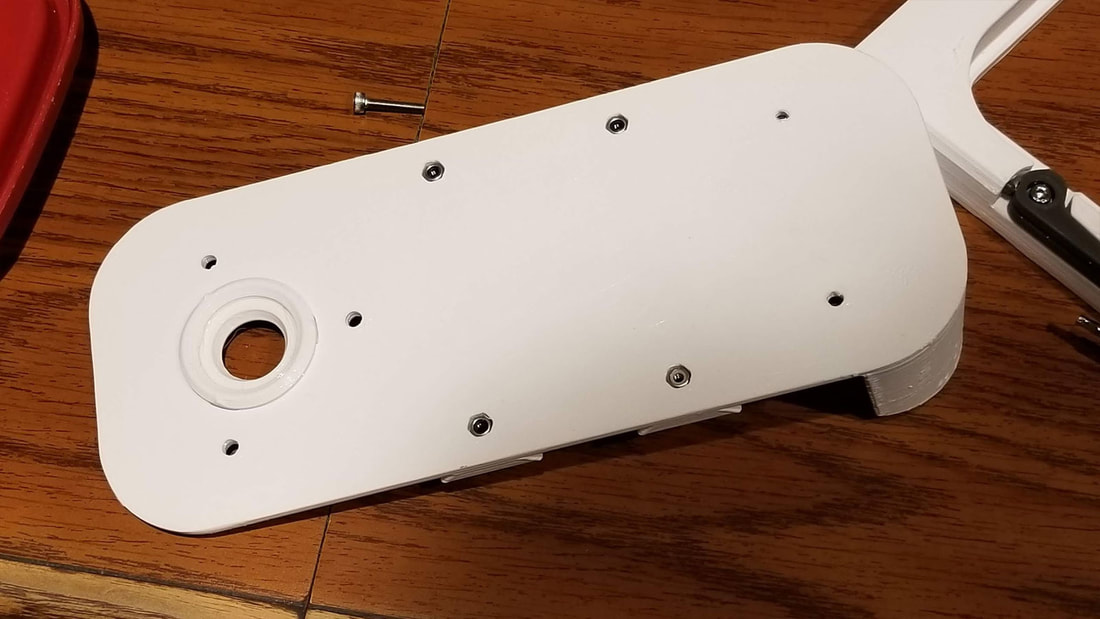 Once the nuts are installed find the center part, which is the thin part with the strange hole to mount the filament pass through ball.  This part has a cut out which matches up with the topology of the lids on my Rubbermaid 21 cut containers, which do not have a clear window.  I used the thinner center part as a guide to mark the holes needed to be drilled and cut in the lid.  To cut and drill the lid, I used some small bits to start the holes and ended with a 1/8" bit for the five small holes, and I used a step bit to drill the largest hole, though it can also be cut by hand if done carefully.  Then clean up any burrs in the plastic left behind from drilling and test fit it again to make sure the hole for the pass through is aligned OK.
Once the holes are drilled, install circular insert with the three protrusions in the top piece.  In the thin center piece, install the P18 17.8 x 2.4mm O-ring and the ball on top of it.  Then carefully assemble the sandwich of the top, lid, center and bottom of the base.  The insert in the top piece will mate with some grooves in the center part and help align things.  It can help to set a couple of the M4x16 screws in through the top and get the lid sandwiched first (which will hold the ball in place), and then putting the bottom part on and finally getting a few of the screws heightened down most of the way to make the rest easier to align and install.  You may want to install some washers as well on the M4x16 screws, which I did with the cap screws I used.  When it is assembled the ball should move smoothly with just a very small bit of resistance, since it rides on the o-ring.

The final step is to assemble the latching base.  This part has 5 components; the base, the lever, a spring from a clicky ball point pen, a detent which the spring presses against, and a spring retainer.  Since the spring is... a spring and to install it requires it to be compressed, please wear some safety goggles.  It also is a good idea to dry fit the spring detent into it's hole and make sure it slides freely.  If necessary clean the hole the detent goes into to make it operate freely.

To install the spring, I installed the detent in the hold (before I installed the lever), and then used a screwdriver to work the spring into position.  It was the most difficult part of the build but it's really not that bad.  I think perhaps using a Q-tip or the end of a cap head screw that would fit in the groove may be better tools for setting the spring in it's groove.  Once the spring is in place, the spring retainer goes in.  This part was a friction fit but it can be glued if it will not be mounted in a way that will hold it in the base.  Also note, if using the top mount for 2020 rails, that design has a different spring retainer design which covers the entire front of the model (so don't use the small spring retainer if planning to use the top mount for 2020 rails to mount this to a printer (which is untested). 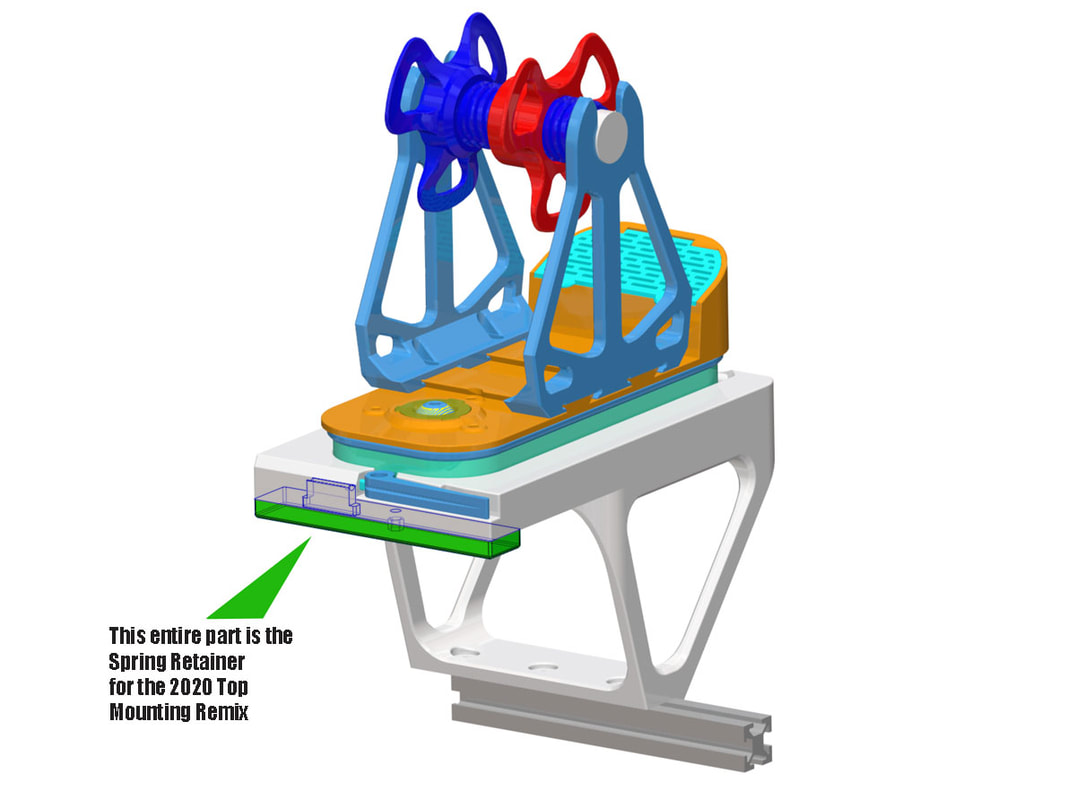 Now that the spring, retainer and detent are installed, the lever can be installed.  It goes in with a M3 locknut in the base and a M3x12 or M3x14mm cap head screw and an M3 washer.  Note that some M3 washers are different sizes, but it should work for washers with diameter up to 7.3mm.  The washer retains the lever so it is important to use it. 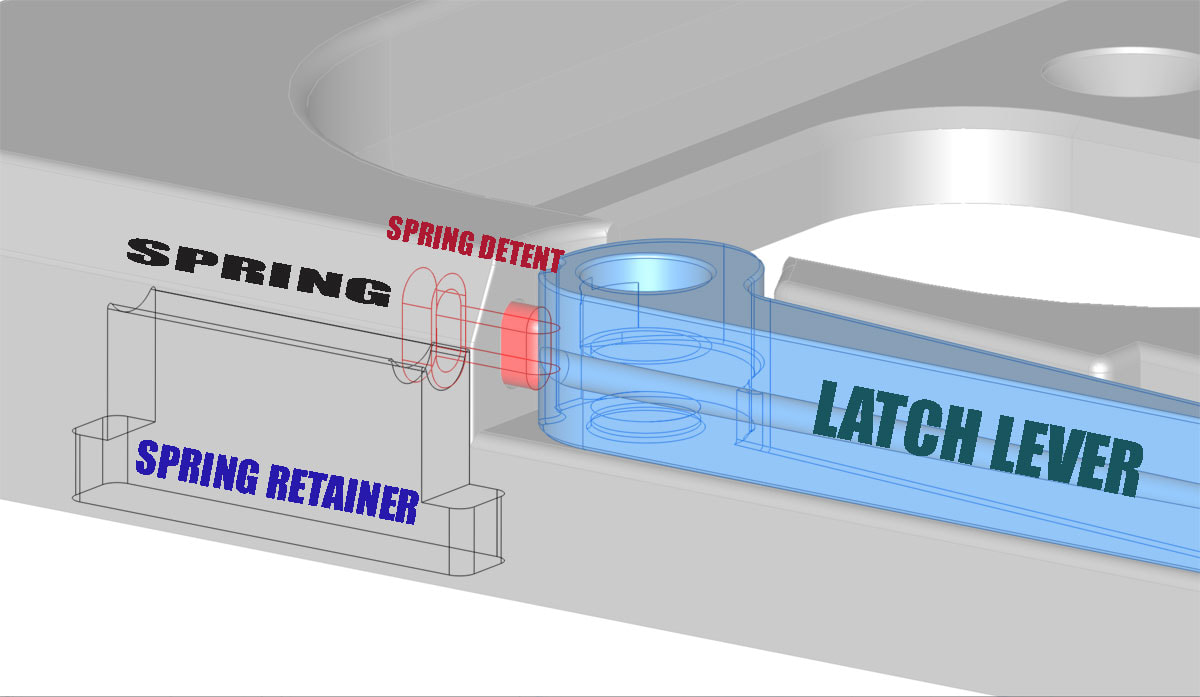 Now the base can be mounted with screws or tape.  The level should operate smoothly. but if it does not check that there are no supports or rough surfaces on the lever or the post it goes on.  To use it, just set the back of the container in the base first, then rotate it down with the latch open.  When it is in place throw the latch closed and it should stay put.

As an aside, if the detent did not print well, try printing it with another part or several of the small detents about an inch away from each other on the build surface.  The reasoning is that when printing very small parts, they do not get enough time to cool and that results in poor quality prints.

The sides of the spool holder just slide onto the rails.  They are interchangeable and M4x10mm screws can be used to secure them in place more permanently if needed.

The central axis spool holder does require some assembly, which is straightforward.  Just install the bearing insert in the base of the larger part of the spool holder and then install 608 bearings on both ends.  When assembled to a spool, it just drops into the spool holder arms and it's ready to go. 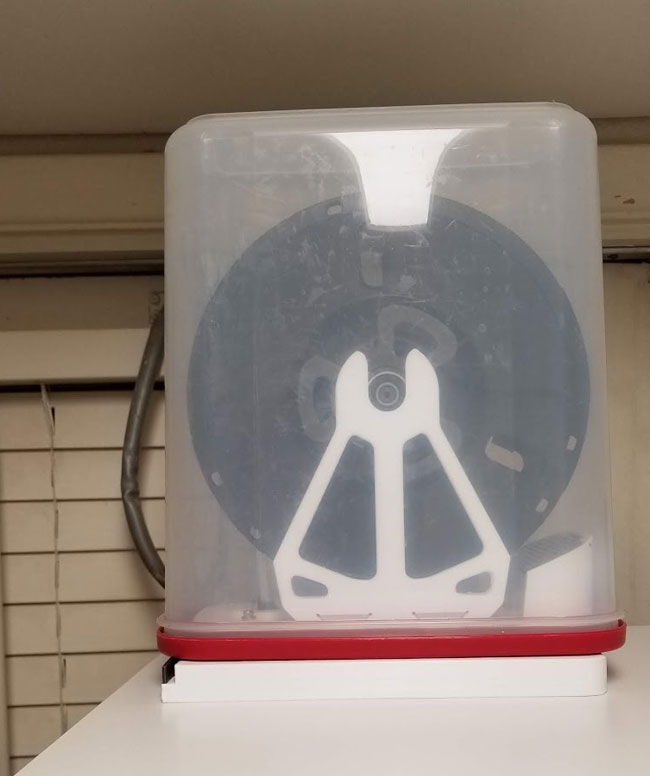