This is not gonna be a complete build log (or I'd never get the thing done :D), but I will post some notes and observations here while I work on assembling my Voron R2.4 R1 kit (as an R2).  I posted the inventory and general initial observations of the Fysetc V2.4 R2 kit here, and a review of the Maker Panda functional parts kit here.

The frame has been the one thing that I was not looking forward to assembling.  I did not do much research, but what I did do had me convinced it was gonna be a problem if I did not have a granite surface plate, or a big enough granite counter top to assemble the printer on... I don't have those things, so I used the next best thing, a wobbly card table.  I won't suggest it, but it did work, in combination with the aluminum bed, which I used to get an actual flat surface to work with.  I also printed a few of these to use during assembly to help hold the newly screwed together corners in place but those were not really necessary in the end.  Even with being careful in assembling the corners, my first result was not fantastic.

It was simple to fix however, and if I built another one I would probably assemble the cube first taking some care, but not wasting a lot of time (and not doing a final tightening on the screws, but they should be tight).  Then I would set the bed plate down on solid surface (if you don't have a wobbly card table, don't worry, a granite surface plate or granite countertop will do in a pinch).  Then, for each corner, I would loosen the rails attached to just the one corner (at both ends of the rails if possible), and then, pressing the corner down onto the plate, use the side of something flat (I used a machinist square, but another 2020 extrusion would also work) and just using hand pressure to clamp one rail to the vertical, I would tighten down the one screw.  Then repeat for the other extrusion which goes into the vertical extrusion.  Reading what I just typed, I realize it sounds like word salad, so here are some pics (the green block is just something perfectly flat like my machinist square or another spare 2020):
One thing I made sure to check while going through this process on each corner, was that the edges were flush between the adjacent extrusions after tightening each screw (that is the side where the green block in the above pics was pressing against).  If it was not flush, I would loosen the screw and start over.  This seems like it would be the simplest method since the rails tend to be more prone to losing a perfectly set position before they are assembled into a cube, and this way only one corner is removed from the cube structure while it is being corrected, and then the next one and so forth.  It was important I think to loosen both ends of the extrusions being adjusted though, which gives the maximum amount of freedom to adjust the corner being worked on, and does not introduce a twist on the far end of the rail (this is not possible on the last corner of the top or bottom of course).  After doing this on every corner, I found it was just about perfect (to the accuracy of my metric tape measure) when checking for squareness (measuring the diagonals of each side).

I also used a small dab of blue threadlocker (damn messy stuff) in every hole where a screw would go, then I cleaned up the mess that leaked out of the threads using q-tips and some alcohol.  Why somebody has not invented a tube of threadlocker that doesn't leak is beyond me, but they would surely deserve a Nobel Prize or something.  Here are a few more random pics from the assembly. 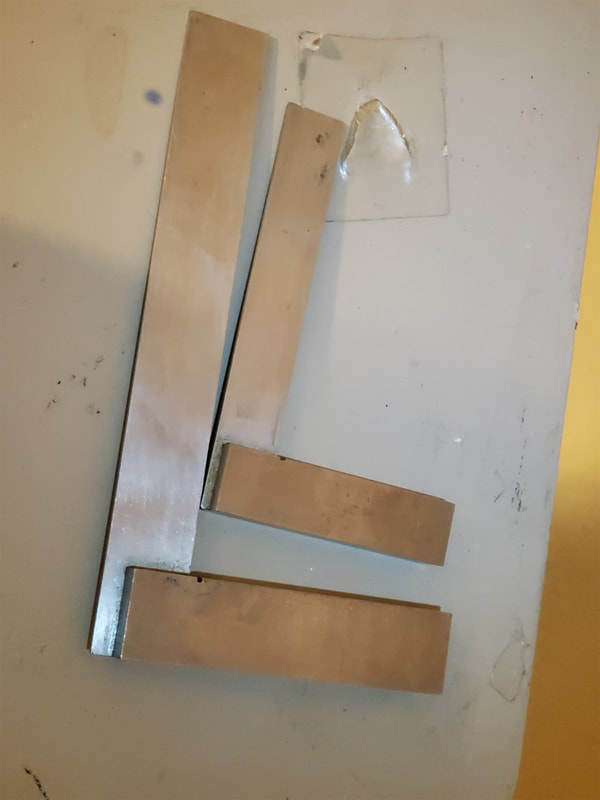 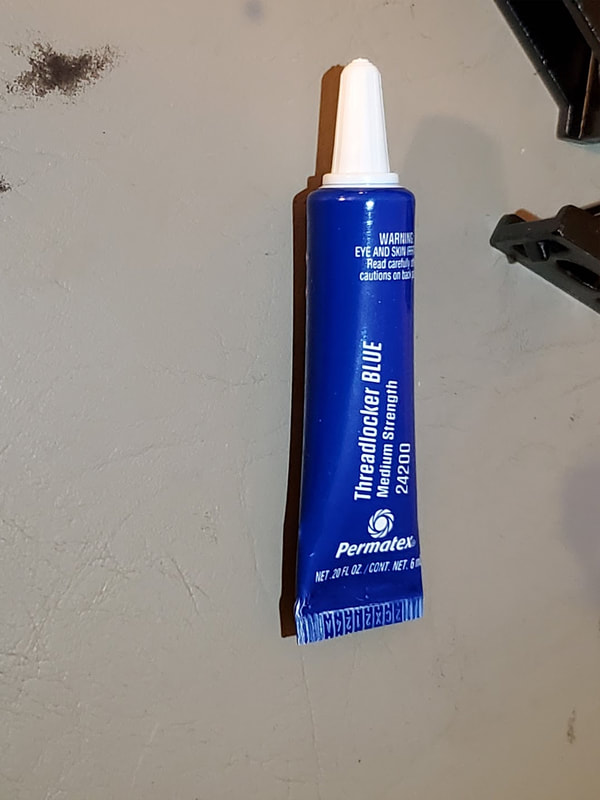 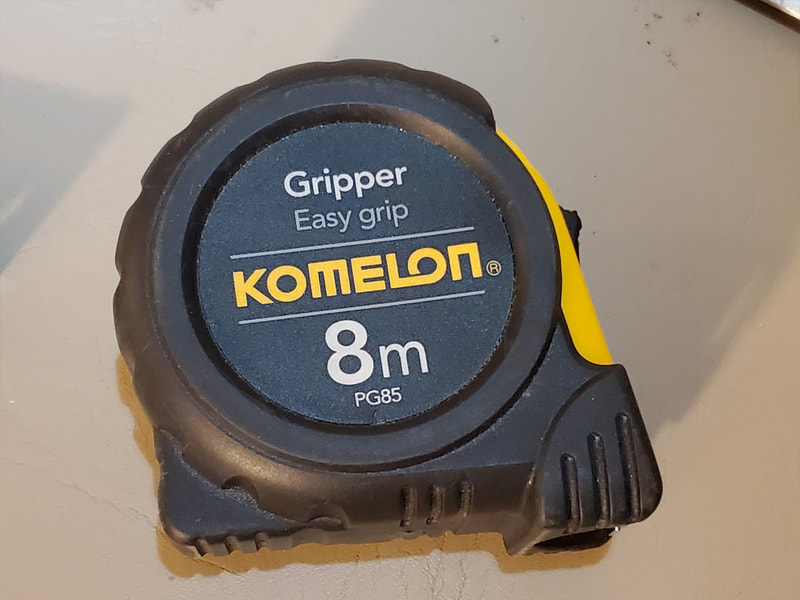 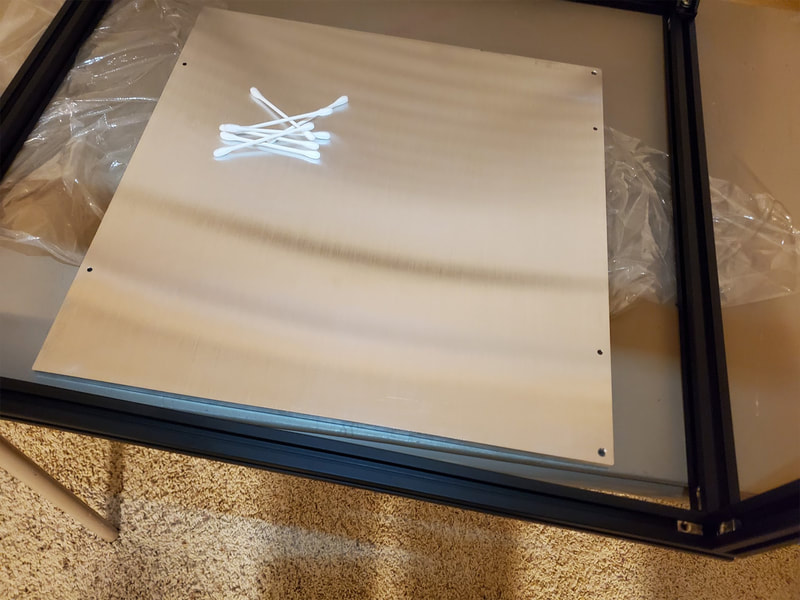 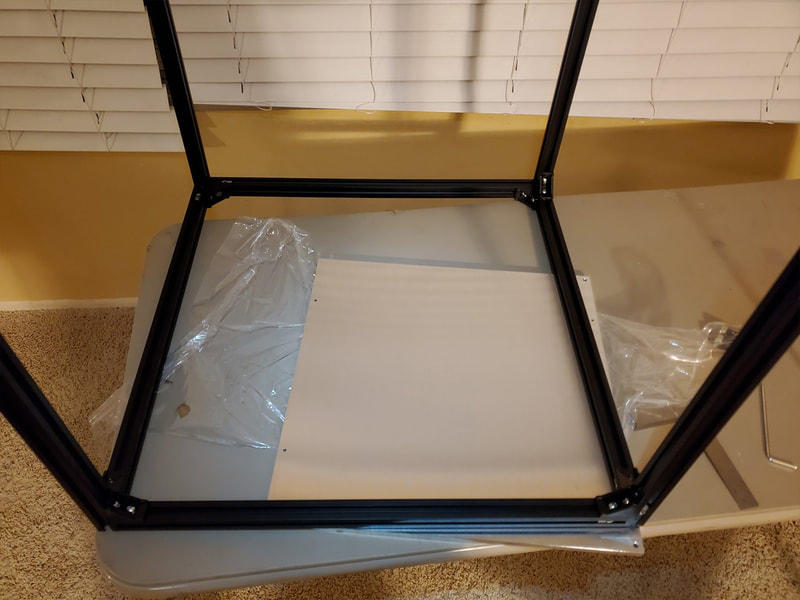 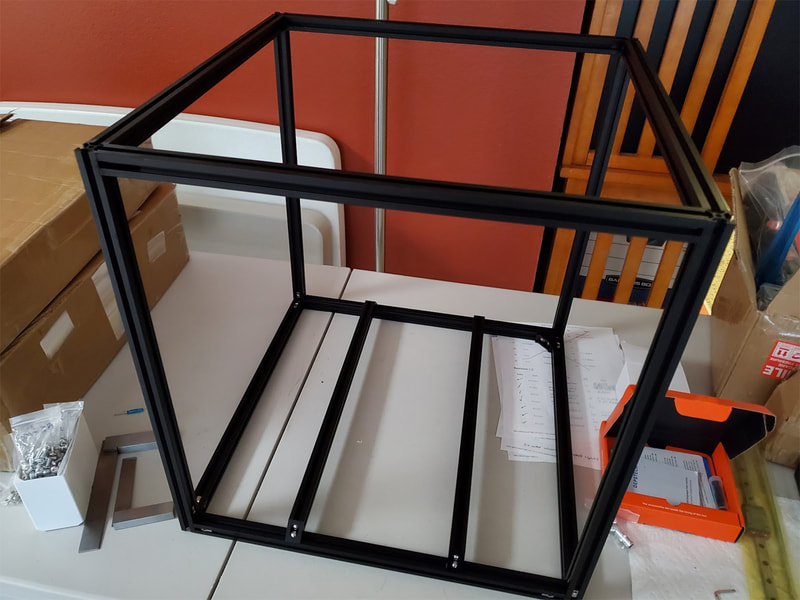 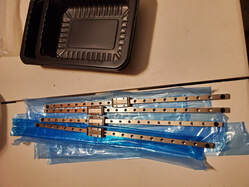 The Z-axis has been a pain, and I have not even started it yet.  I have used linear rails on my first printer (a Kossel), and there I used some SuperLube which worked OK (just gotta be sure to go light on the stuff), but I had read several things about the Voron needing this or that lubrication.  The best lubrication for a cheap Chinese MGN9 rail is one of the rabbit holes I hope to never have to fall into again.  In the end I decided not to spend $20 bucks on a tube of Mobile EP2 lube, which I will probably never use 90% of, and instead just ordered some superlube - but this time I am gonna try it in the high viscosity oil version.  I know, I know, Superlube has PTFE, which is not recommended by Mitsumi or other purveyors of fine quality linear rails.  Buuuuttttt... the rails I have are cheap no-name Chinese clone rails, so I think anything goes, right?  Joking aside, and understanding that lubes with additives are "verboten" by the linear rail mafia, I will take the risk in this low load application.  The reasons for going with the superlube over grease are firstly, the Superlube should not affect the seals (though I doubt the seals are natural rubber anyway), secondly my experience with Superlube has been good (it is low maintenance and does not dry out), and finally it doesn't have any real smell, and is even safe for use in equipment used to make food (according to the label it says it is "food grade" "NSF (H1) Registered").  The last point is not a big deal though, since I'm not going to use the Voron as an easy bake oven.  I would also add a forth, which is that the stuff is cheap and available in a small bottle so I don't have to buy a pound of the stuff to use a few grams.  I am also pretty sure I will be able to use it on other things, since it is safe on plastics as well.

Because I had previously lubed the bearings with grease, in my haste to get something done (before I decided to use the superlube oil), I had to re-clean the bearings and used some paint thinner (mineral spirits) to do that.  I went ahead and removed and cleaned the balls as well since I was changing to a synthetic oil.  Re-balling the blocks is a pain, but it is probably the only way to make sure all the grease was removed from the channels.  I first loaded up the balls in the blocks (dry without oil) and then when they were all set up, I added a small amount of the Superlube oil to lubricate the ball bearings, and added a couple drops to the rails as well (and then wiped everything down after it was circulated around).  To help get the blocks loaded on the rails, I used my finger to press the bars apart as I slid the rail on.  That seemed to help to keep the balls from popping out while the rail is installed, but it can also be done with care and going slow. The rails are now really smooth, and I can see the balls moving correctly in the tracks. 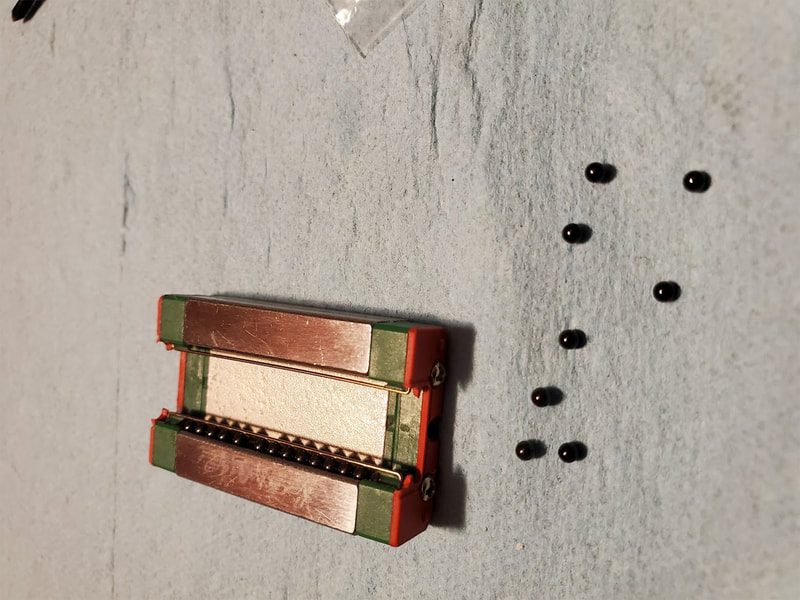 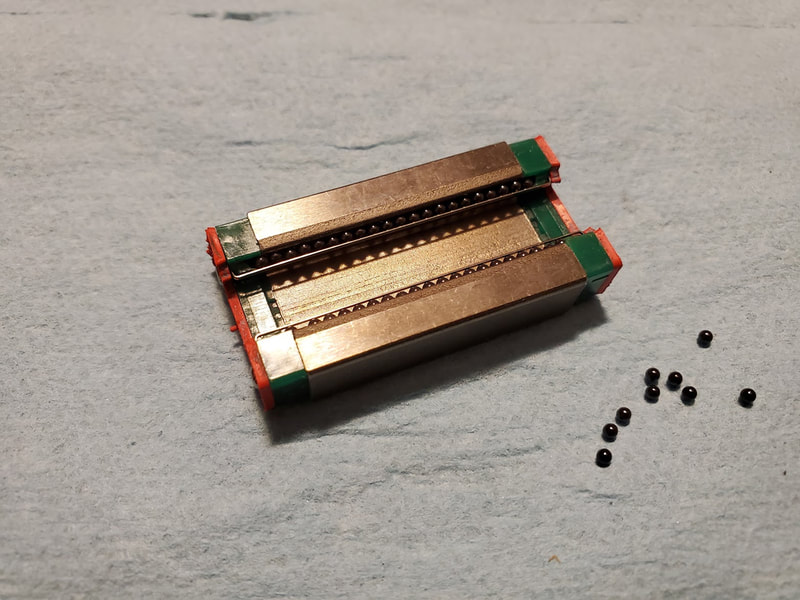 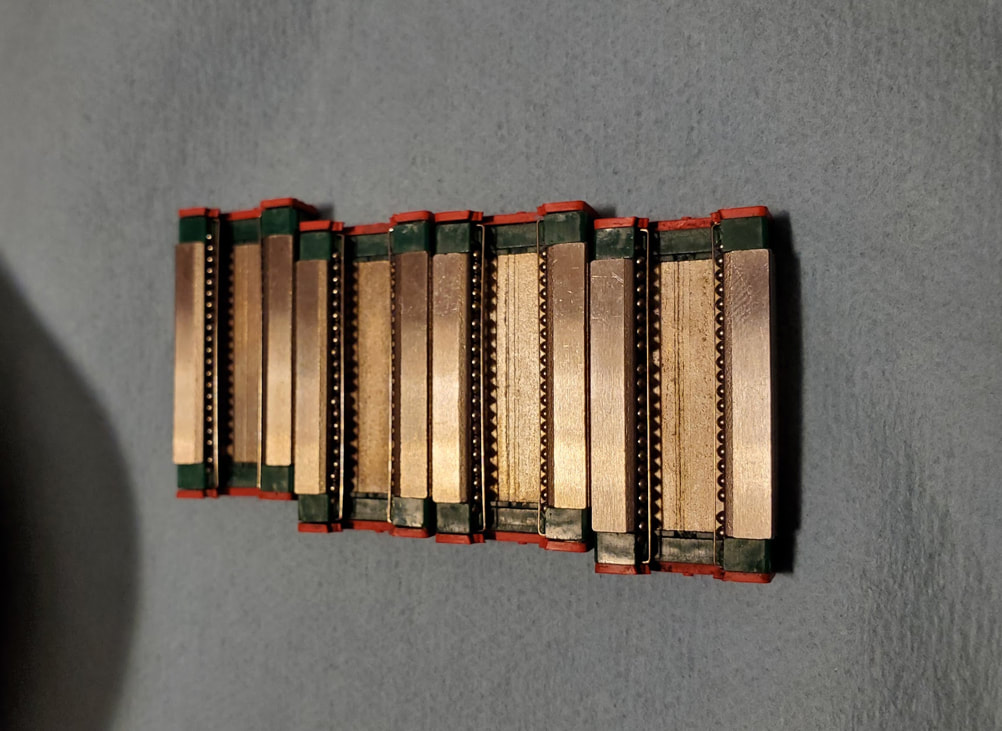 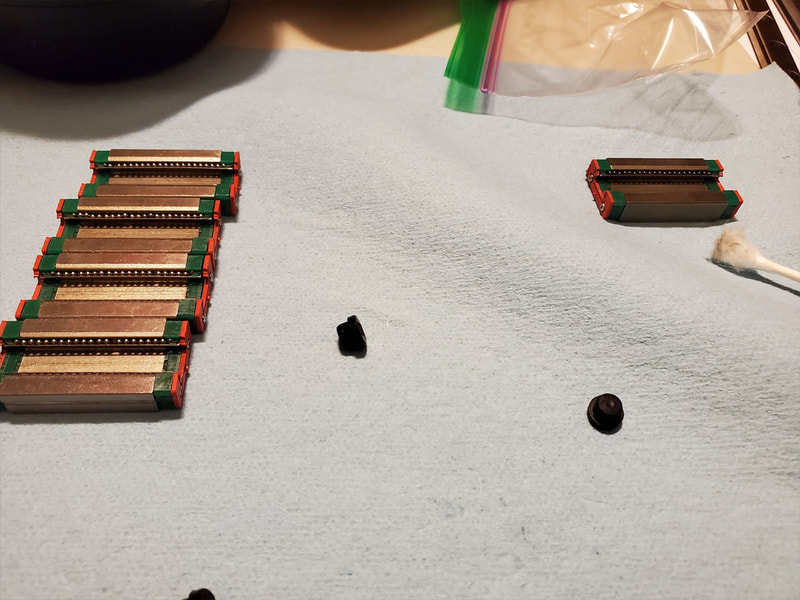 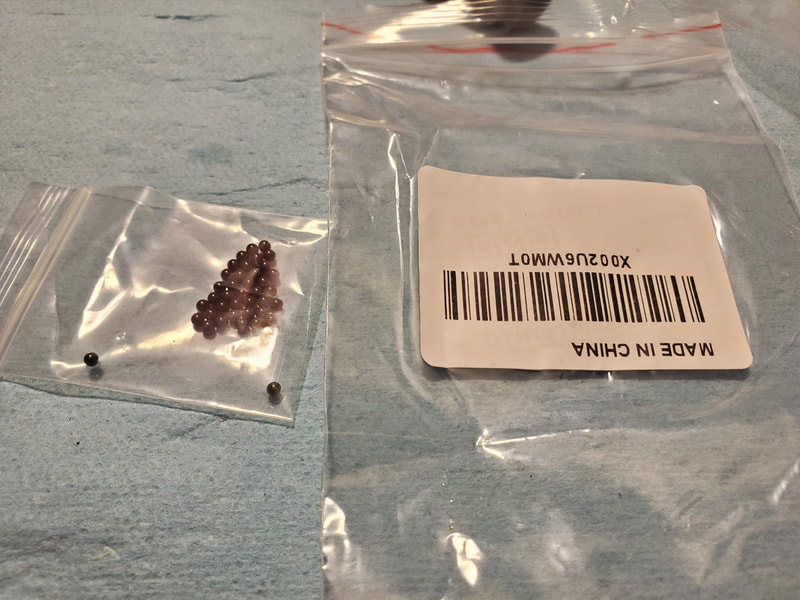 The next step is to install the rails on the frame.

Just Some Notes and Other Stuff

I'm working on the layout for the electronics bay.  The 350mm Voron has a lot more space for this which is great since I'm thinking about adding a few things to the DIN rails to add some additional protection for the heated bed.  This is a drawing of how I plan to organize the rails: 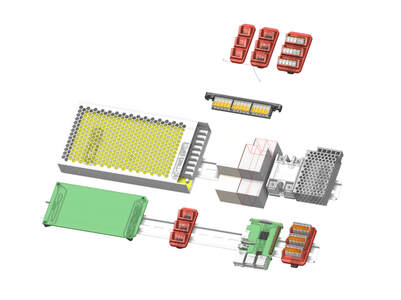 There are a couple of components on the upper DIN rail which is reserved for anything running AC, and below the will be the DIN rail for DC powered components.  The box like things on the upper rail are a over current protection device and a double circuit breaker dedicated to the bed.  I'm gonna set it up stock first though, and see how much current the bed really draws during heat up, so I can figure out what size breaker I should use.  I'm also planning to use a GFCI plug on the printer power cable (external to the printer).  I may add a DIN mounted latching relay (not shown), so I can have another way to shut it off (which would utilize a smoke detector and maybe temp sensor).  The red things are WAGO holders, I plan to have one for the 24VDC and one for 5VDC.  The WAGO holders were found on TeamFDM, thanks to Demosth and can be found here.  Finally, I may add a small powered USB hub somewhere to connect up the webcams so I won't need to have them fed through the Pi (though if it too tight I will just skip that).  I am planning on designing a front panel which will include a USB panel extension and a microSD extension so I won't need flip the printer to do basic maintenance on the Pi.