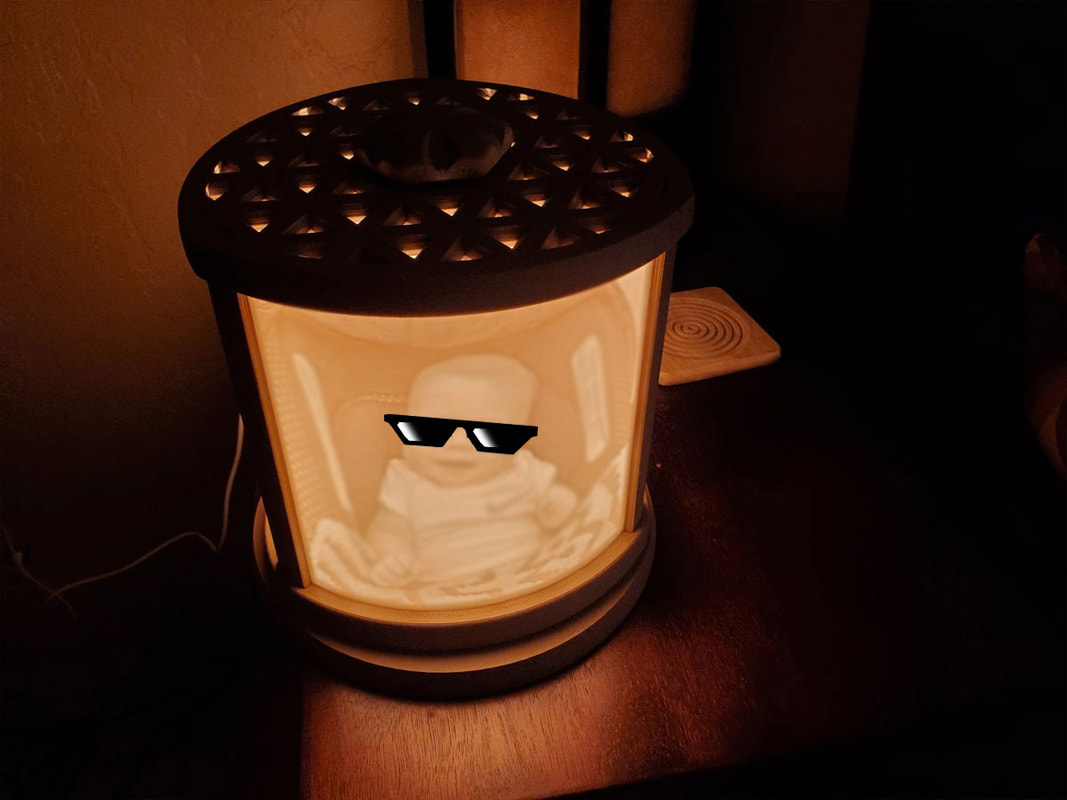 You can find the models at Instructables at the link below.  This is also entered in the "Anything Goes" contest.

The instructables link was not working for a bit yesterday, after it was posted, but it is working now - and it's featured too!
www.thingiverse.com/thing:5172186

The following will be needed to build this Lamp.  Most of the screw sizes can be substituted with longer screws of the same time unless noted.
Additionally, some tools and materials will be needed:
For the material to print with, I used these:

The first thing to do is get three JPEG images and crop them to 1000x1000 pixels (possibly anything square would work, but these are the dimensions I used). I used the online "Image to Lithophane" generator at https://3dp.rocks/lithophane/ to create the lithophane panels. I have no affiliation with them, but have used it to generate several lithophanes which have turned out great (they also have a link on their site to support their work).  There are probably many other ways to make a lithophane panel that would fit, so I included a blank panel that can be used to check the size (if you make one using another tool).

I used the following settings:

Model Settings:
Image Settings:
I selected the "Outer Curve" shape in the preview.

Then just print the STL's for the lithophane panels in a translucent white filament.  When printing lithophanes they should be solid, and I am no expert but what I did was set top layers to 99999 or something very large, so they print with no infill.  There are other ways to do this and again I'm no expert but I do know that they have to be solid prints.  I found it helps to rotate the panes by 45° in the X-Y plane and add a brim when printing these.  The supports should be turned off for the lithopanes, and most folks will get a better result by printing slow (I used 40mm's but slower is better).

The base of the model has one half the bearing chase and is mostly printed in wood PLA.  However since wood PLA is softer and rougher than normal PLA, it is probably not ideal for a bearing chase.  To help with that, I did a filament change on the base, and switched from wood to regular PLA (plus in this case) for the bearing chase.  The black PLA is hidden and should wear better (pics below).
To do a filament change, I first sliced the model in Cura and then used the layer slider on the right side to determine which layer is just above where the wood should stop and the black PLA should start.  I noted this layer number and then opened "Extensions > Post-Processing>Modify G-Code", that opens a new window, so click "Add a script" and select filament change.  Then enter the layer number where the filament change will start (if in doubt just go up one layer).  Also note that there are settings here for initial and later retraction and where to park the nozzle.  I usually have the nozzle parked at x=10 and y=10 and set the initial retraction to just 3mm or less on a direct drive, then the later reaction can be higher like 30mm or more.  I have had problems with the default initial retraction setting of 30mm in the past, since that caused blobs to occur so I now use a much smaller number (3mm or less).

When doing the filament swap, be careful not to bump the x-axis gantry of the printer and throw the z-steps out of whack.  When the printer gets to the point where the change will occur, it will pause and prompt on the screen.  If you run Octoprint, you may need to acknowledge some buttons there too.  There is a bit more on the filament change plugin in steps 5 and 6 here.

Another note regarding the filament change.  If possible try to use a filament which is close to the same flow and temp on both the wood and whatever PLA is used.  If you can't do that, then you can try setting these parameters using another plugin called "ChanegAtZ 5.2.1(Experimental)" and modify the temp or flow settings after the layer change.  I have not used those plugins together so I'd suggest making the changes offset by one layer between the plugins if you have to change flow or temp for the different materials.

I tried to minimize supports and some parts will look much better if printed in a specific orientation, a few of these are shown below: 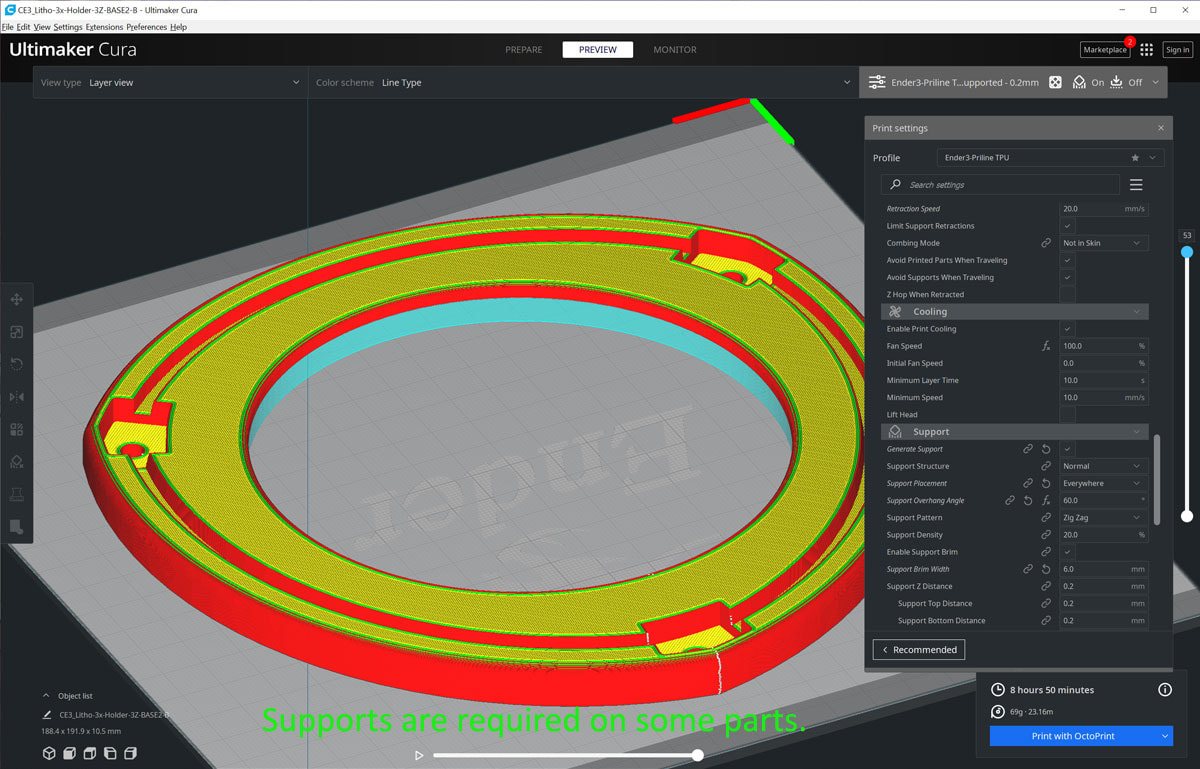 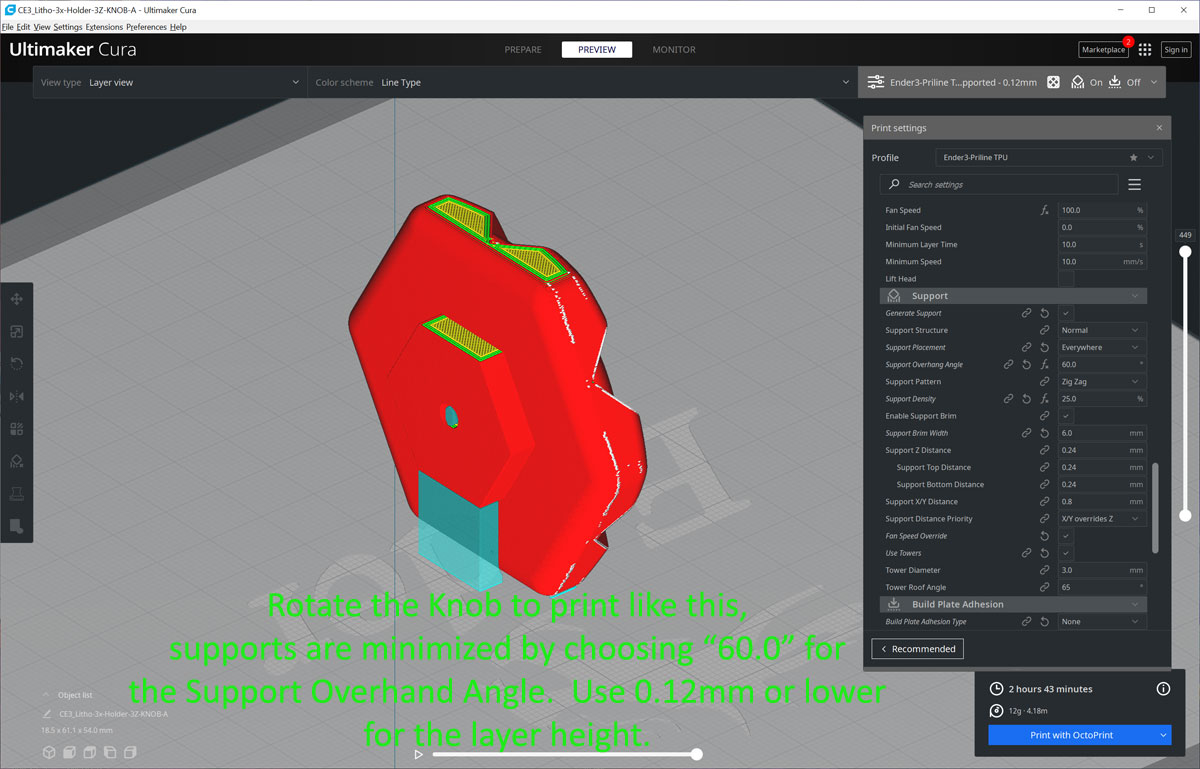 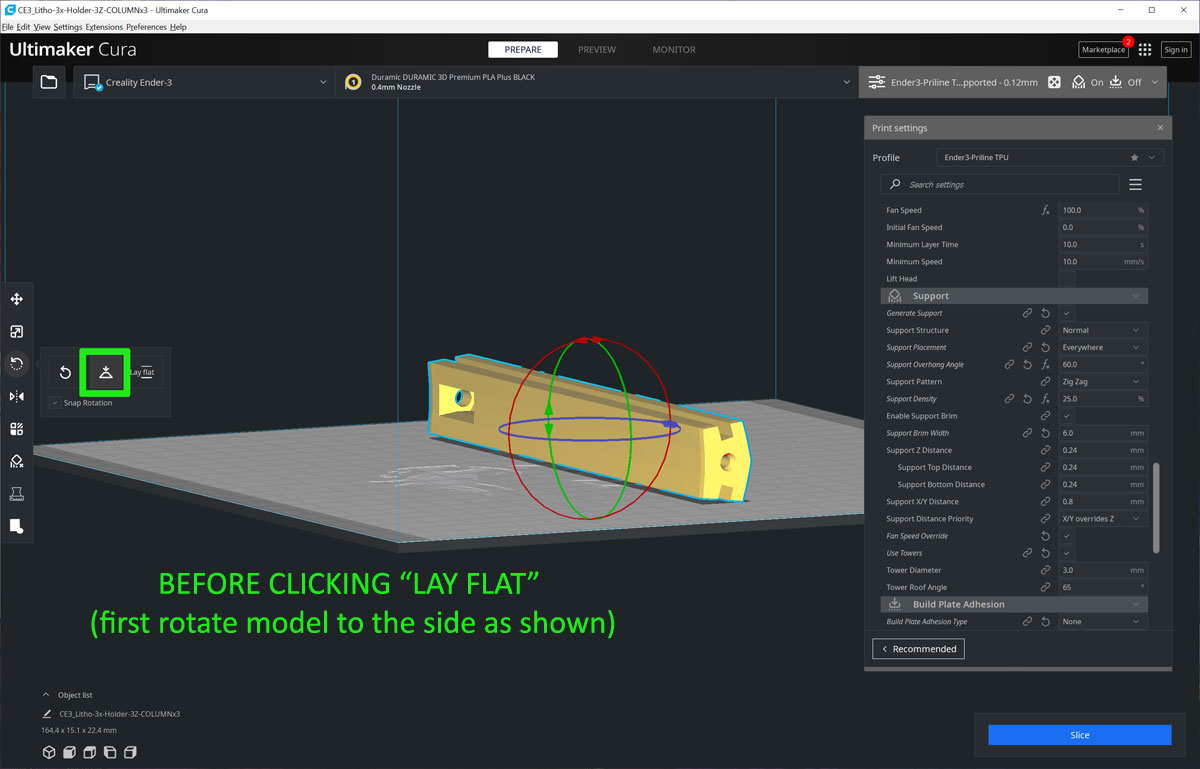 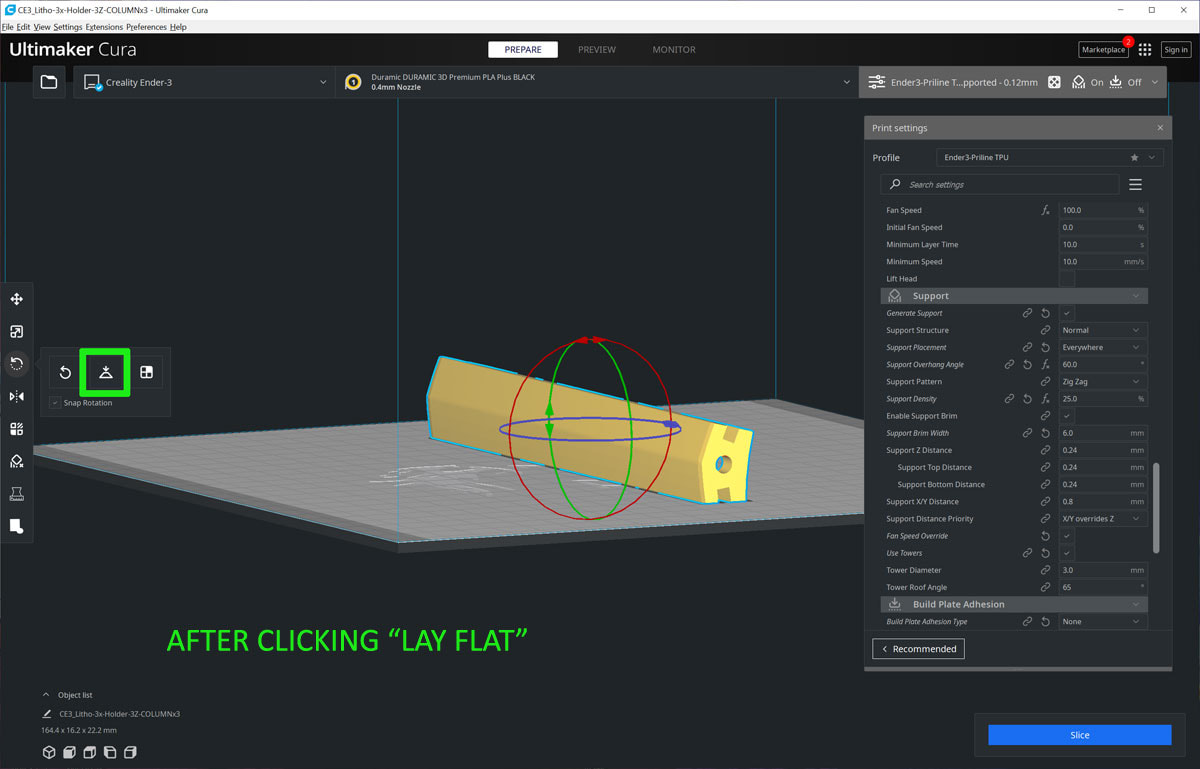 Regarding the knob, it will look better if it is printed in the tall orientation as shown.  Use 0.12mm layer height or less and you can play with the support overhang angle to reduce the supports.  Also slow the print down if you find problems with overhangs, usually 40mm/s is a good place to start.

For the columns (shown in the last two pics above), they should be printed as shown with supports touching the build plate only.  That way the supports don't fill up the pocket for the M4 nuts.  Use the "lay flat" button in Cura to set them to lay flat to the build plate once rotated to the side.

To assemble this, I started from the bottom up.  Due to the way the base is held together though, it comes together pretty quickly.  Since the BB's tend to get everywhere though, I suggest doing this in a place where any of the BB's that run away won't be found by young ones or become a hazard.  I only lost one BB putting mine together but I dropped several.  Having a dish to hold the BB's while working on this is also handy.  It also helps to go over the parts and make sure they are smooth where they will go together, this is especially important on the parts of the base and the bearing races.  It can help to smooth the bearing races with some sandpaper if there are any bumps, seams or zits there.

To start, I pressed the three M4 lock nuts into the columns which have a pocket for them.  They should press in place but you can glue them if they are loose.  If they are tight, heating them a bit can help with pressing them in place.  Mine went in without glue or heat.  I then made sure that the locknuts were aligned with the hole in the bottom or the columns.

Next I located the three parts for the base.  These three parts create a bearing which will enclose the BB's.  To assemble it, I set the base and lower (outside bearing retainer) in place, and then set the BB's in place (see pic): 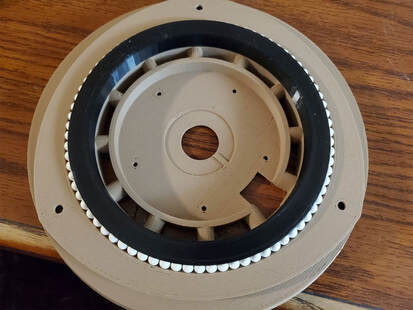 Once the BB's were in place (they should not be tight or forced in), the top part of the outside bearing retainer was installed.  This top part has pockets to hold the columns which were then installed using the M4x20mm flat head screws.  The screws install through the one hole in the base and go through both the outside bearing retainers and into the M4 locknut pressed into the column.  The screws sandwich the whole thing together.  I installed each column one at a time while holding the other parts together so the BB's would not fall out.

Next it was time to install the LED holder.  This is just glued in place so I did not take a pic, but here is a pic of the LED in the LED holder.  The small cup shaped part can also be glued to the top of the LED holder, this must be as close to the center of the LED as possible.  Make sure the LED can be turned off and on while installed and if not, sand the holder until it works without problem (mine worked fine).  Once it is good remove the tape backing on the Ikea LED and press it in place.  Then route the cable for the LED through the base and into the cable management cut out. 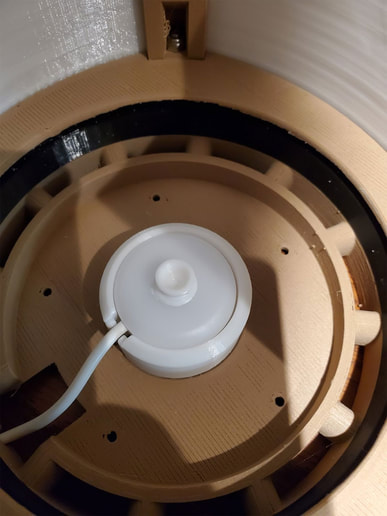 Now the Lithophane panels can be installed.  If they don't slide in easily, sand or deburr the edges so they slide in.  Again I did not have any issue with this and they are easily removable.  I did not glue the panels in since I plan to change them in the future.

Finally the top needed to be assembled.  The top has a spring mechanism which gives the button on top a more positive feel.  It also keeps the pushrod from weighing on the LED.  To assemble this, first I installed the three M3 locknuts in the sloped part.  Next the three springs were loaded into the parts as shown below.  The springs should sit over small bumps which help to keep them in place.  I found that lightly resting the parts together while using a small screwdriver to nudge the springs into the seats worked the best.  Once the springs were placed, I installed the three M3x20mm flat head screws through the top, then through the button spring mechanism where they went into the captive M3 locknuts.  At this point I cycled the button multiple times to be sure nothing was catching.  If there is a problem it must be fixed at this point since the assembly will not be removable once the knob is installed.

Next the Knob is installed with an M4x16mm round head screw.  I used glue as well between the button face and the face of the button spring mechanism.  There are grooves to index the button which should help with alignment as well. 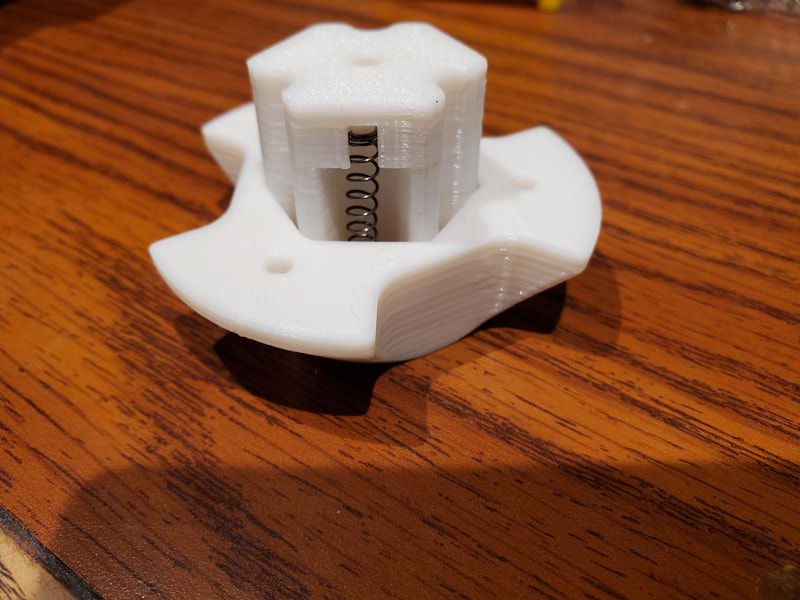 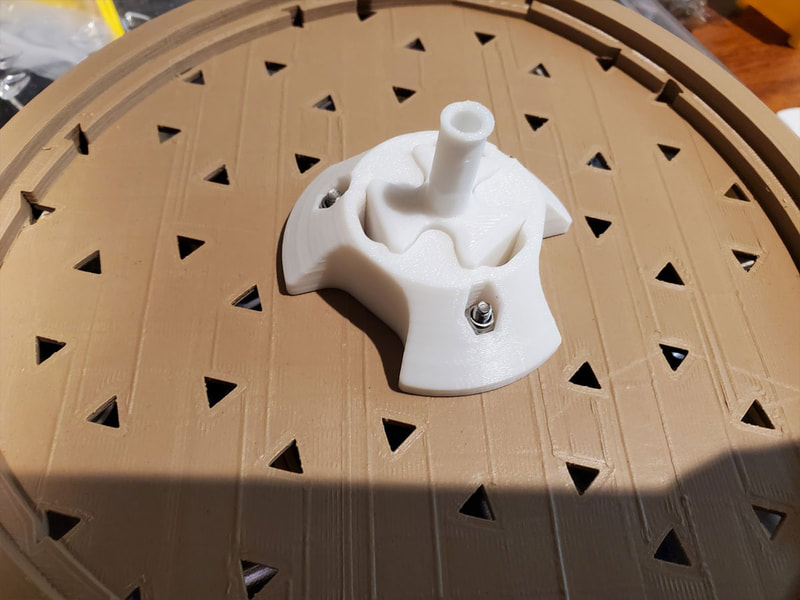 To complete the assembly of the top, a pushrod needs to be installed into the button spring mechanism.  This is just a rod which actuates the Ikea LED light by pushing down on the top.  Because there will be some variation in different prints, I designed this part to be somewhat adjustable.  The first part that goes in, is a hollow tube which can be seen installed in the left most picture above.  This tube is glued in so care should be taken that the button is already installed since it won't be coming out after this.  I allowed the tube to dry and then set the pushrod into the tube with some glue and then set the lid on the lamp with the pushrod just set in position to dry.  The pushrod should be lowered to touch the cup that is glued to the LED.  The pushrod does not normally put much force on the LED, it just sets there.  Before the final gluing of the pushrod, I dry fit it in place to make sure that it looked OK and I could rotate the lamp without it causing any problems.

Once the pushrod is installed, glued and dried, I just installed the feet (printed in TPU) with some superglue, and then tested it out.  The button/knob is used to spin the lamp and also actuate the LED.  The button has a good positive feel thanks to the springs so I'm pretty happy with the final result. 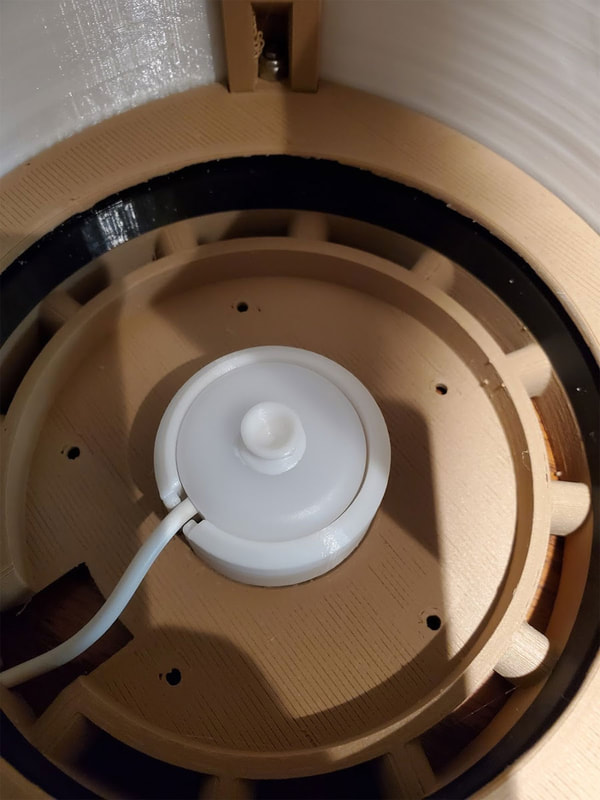 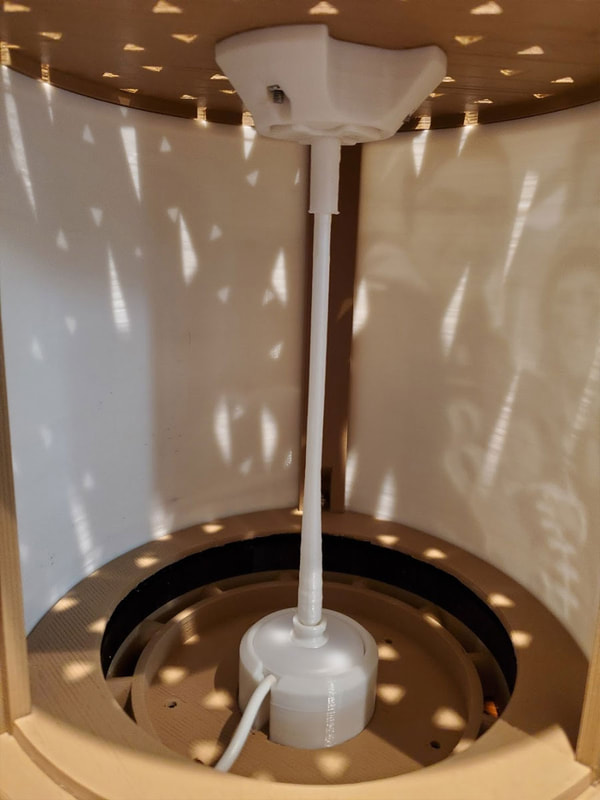 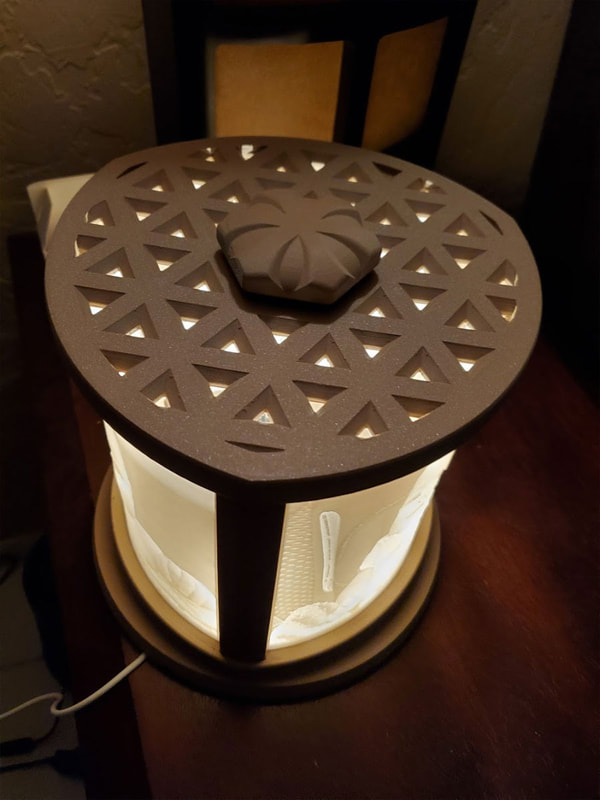